Wind River is one of the biggest enterprise grade Yocto-based Linux providers. In late 2019 they rel...

Wind River is one of the biggest enterprise grade Yocto-based Linux providers. In late 2019 they released their LTS19 version based on Yocto Zeus (3.0).

As Mender is also compatible with selected Yocto releases including Zeus, the integration with Wind River Linux just requires some small tweaks to make it work seamlessly. In this tutorial we will describe basic steps required to make both working together.

For this project we will take advantage of Wind River’s Open Source version available in its GitHub repository. If you are using any paid plan, the steps should be the same, but you will likely have to use a different <repoURL> than the one described below and the credentials they gave you.

For theWind River® Linux LTS19 Open Source edition the git clone command should look like this:

For this example, we are going to rely on the qemux86-64 BSP provided by Wind River.

You may need to perform additional modifications based on the BSP you are using, for this QEMU example it works as follows, however you may want to get in contact with us or Wind River if you need a custom integration.

First, we will need to set some environment variables needed to use the bitbake utility and some additional features from Wind River by running the following commands:

After the Wind River’s sdk is in place, we will need to add the Mender components.

Please be aware that as we are using a version based on Zeus, we will use the meta-mender that was developed to be compatible with it.

Once all the sources are in place, add Mender layers to your bblayers.conf file.

Please notice there are additional layers that were already cloned as well and you can add them to your project with the command above if they make sense for your testing.

As the next step, let’s modify the default configuration provided by Wind River®.

First, we need to ensure that internet access is enabled as they disable it by default:

and then, standard Mender configuration should be extended as shown below (comments are only given for clarity and do not need to be added).

Then we need to add the Mender specific configuration:

If you are configuring a demo environment, you may want to add quick polling intervals as follows:

Wind River® Linux makes usage of the PNWHITELIST flag as mechanism to avoid third party applications not validated or tested on their side to be included in a project without being explicitly whitelisted before, as described in their official docs, it requires to be formatted in the way PNWHITELIST_layerName = "recipeName1 recipeName2". So we need to whitelist some mender recipes and their dependencies by adding the following lines into your local.conf file.

At this point we are ready to build our image. Just run

for building the wrlinux-image-core image. You will have access to the following images as well out of the box:

After a successful build the artifacts should be available at build/tmp-glibc/deploy/images/qemux86-64.

In order to run your image you should simply run a command like the following one:

Where -m means memory in Mb, -smp how many cores we want to give to our guest system and -drive is used to point to the image we created that we are going to use as a disk.
Additionally -bios set the filename for the BIOS and -enable-kvm enables KVM full virtualization support.

Please note the OVMF_CODE.fd file could be located in another place or even have a different name, meaning you could run $find /usr/ -name OVMF_CODE.fd or check the description of the package.

Also notice you can also run runqemu qemux86-64 if you want to use the default values.

In the following screenshot, please notice: 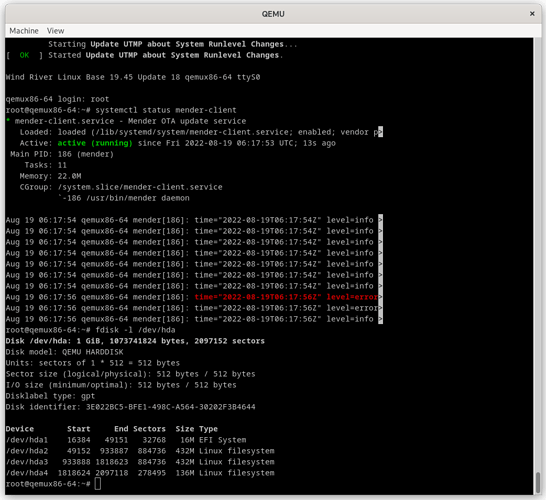 Also you can open the Mender Web UI and see there is a new device trying to be part of your fleet: 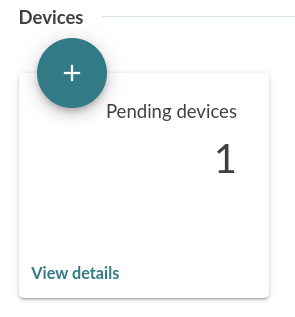 And after accepting it, then you can see its inventory data in the Mender Web UI as well:

From this point you are ready to perform secure OTA updates to your device by using Mender like with any other device by following our documentation.

I hope you liked the tutorial. You can find more tutorials inside our Mender Hub knowledge base. You should also test this easily using our free-trial account that is available for up to ten devices.